The Tour Down Under wrapped up on Sunday, with journeyman South African Daryl Impey taking a surprise victory over a heavily favored Richie Porte. Highlights from the sprint-heavy race featured the return to form of Andre Greipel, a surprising in-shape Peter Sagan, a revived Elia Viviani, along with a humbled Caleb Ewan. The general classification also produced a thrilling tied-on-time victory for the darkhorse Daryl Impey, while Richie Porte showed a return to form following a recovery from his horrific crash at the 2017 Tour de France.

While people tend to far read too much into these early season friendlies, there were a few developments at the Tour Down Under that I believe merit mentioning and could prove significant later in the 2018 season.

First, riders with a sinking stock following the first World Tour race of the season.

Haas has displayed signs of overwhelming talent in past versions of the TDU, in addition to snagging a top ten at last year’s Amstel Gold and the Montreal and Quebec City UCI races in 2016. He showed up at the 2018 TDU with a new team and was talked up as a potential race winner. However, he quickly went backwards when the pace picked up. He cited the extreme heat as the reason for his struggles and was very vocal in his criticism of the race organizers to run the race in such high temperatures. If the South Australian summer he too hot for him, it could be time to move on from the race, since editions in the past few seasons has been plagued by extreme heat and global trends suggest this isn’t likely to change.

The young Australian on Bora-Hansgrohe was expected to build off his third overall last year and was highly touted as a potential contender for the overall victory. He is now in the meat of his 20s, and such it is ripe time to start delivering results if he wishes to retain a position as a team leader. While he showed an impressive acceleration to follow Porte on the slopes of Willunga, he was quickly dispatched from the Tasmanian’s wheel, losing major time and forfeiting a shot at a podium position in the process. While the Queenslander tends to show flashes of brilliance during the early season Australian calendar, he seems to peak too early every year and has consistently failed to show up during the meat of the European season (aka The One That Matters). At 25, it is now or never for McCarthy to establish himself as race winner or resign himself to a career spent fetching bottles and ensuring that his team leaders have a slipstream to ride in.

Yes, Richie Porte won atop Willunga Hill for the fifth consecutive year and showed that he has recovered from his crash and physically returned to form. He also went on to finish second overall, tied on time with Impey and losing the race on countback placings.

How could his stock go down after this performance?

The negative: He finished second overall tied on time with Impey and arguably could have won the race had he not stopped racing before crossing the finish line on stage 5. In addition, it is debatable if Porte should even be present at the early season race showcasing his Tour de France form. I personally think that Porte places far too much emphasis on showing up to the Tour Down Under in top shape. He consistently fails to display the type of explosive climbing he shows on Willunga Hill over the remainder of the season. While Porte is cutting weight and fighting the media scrum, his Tour de France competitors are enjoying a more comfortable body fat ratio and calmly banking base miles at training camps or at the notoriously relaxed Vuelta a San Juan. Porte is paid to win Grand Tours, not the Tour Down Under. He needs to prioritize his form and energy accordingly.

There are also massive question marks surrounding the unity and cooperation of Porte’s BMC team. During the run-in to the Willunga Hill climb, EF-Drapac moved up the field in anticipation of a turn into crosswinds for the final few kilometers before the climb. While deft, this move should have been easily anticipated, especially since this was the second time the race had ridden this section of the course.

In the screenshot below, it is clear that EF-Drapac (the pink train) is moving up the field to ambush the race in the upcoming crosswinds.

Once the race makes the turn, the EF riders jack up the pace, put the race in the gutter and shred the field. BMC is present at the front of the field, helping EF turn the screw.

The only flaw in this plan is that the BMC team leader, Richie Porte, is back in the field, riding dangerously in the roadside gravel, and spending valuable energy to close gaps. Porte is the last rider pictures in the screenshot below. Notice his teammate pushing the pace in the right-hand portion of the frame.

Porte was only able to recover and get back on terms with help from Peter Sagan and his teammate Daniel Oss. While he got back to safety before the climb, the huge effort to close gaps when he should have been sitting in, protected by teammates, likely cost him the precious energy that he needed to eek out an extra second at the end of the stage. If BMC is serious about helping Porte take a Tour de France win, it desperately needs to work out these kinks before July.

Ewan won 4 sprint stages at the 2017 Tour Down Under and was widely seen as ready to usurp Cavendish, Greipel, and Kittel in the bunch gallops at the grand tours. Flash forward twelve months and the Australian has been brought back to earth. While he left his home tour with a stage win, he was also bested by an aging Andre Greipel, middle-of-his-offseasn Peter Sagan, along with being beaten by a hard-charging Elia Viviani during an embarrassing moment of over-confidence.

During the run-in on stage 3, Ewan greatly underestimated the speed of the world-class sprint field by attempting to play god and gift the win to his leadout man Alex Edmondson. Ewan clearly lets off the gas assuming the gap between him and the rest of the field is too large to close. 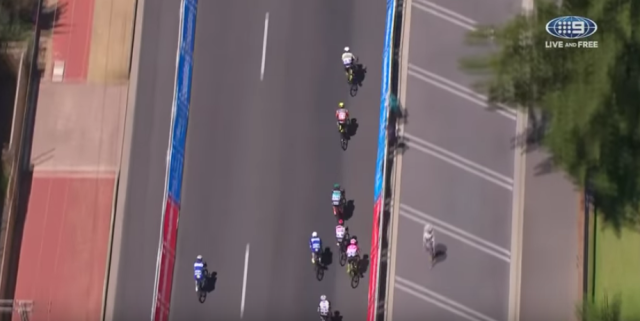 However, by the time he looks back to see a fast-closing Viviani, he cannot pick his pace back up and is soundly beaten to the line. In the screenshot below, Viviani (in blue) has wound up his gear and is blowing by both Edmonson and Ewan on his way to the stage win.

A possible upside is that Ewan could be building into his 2018 form at a slower rate than in years past, which could leave him with more finishing pop for the European season. Also, a humbling week at his home tour could have been exactly what the young Australian needed to grasp some well-needed perspective and respect for the level of competition he will face when competing for stage wins at the Tour de France.

Now, the riders leaving Australia with a healthy, rising stock.

In addition to sharing a name with one of the best architecture movements of the 20th-century, the young German sprinter impressed with two top fives against a field of heavy hitters. His Sunweb team has an amazing track record of developing young talent, which ensures that Bauhaus could become a sprinter to watch for the upcoming seasons.

The Italian sprinter and Olympic champion appears to be a man revived following his rescue from his imprisonment at Team Sky. He struggled to get race starts at Sky, and was rarely able to score wins against the top sprinters when he got the chance in the past. After his stunning comeback win against Ewan on stage 3, he looks set for a big season as he enters his physical prime.

The three-time world champion sauntered to the start line of the TDU with a no-stress demeanor and insistence that he came in peace. After stunning the sprinters at the opening criterium and spoiling the climbers day by hanging on up the climb and easily winning the sprint from a reduced group on stage 4, it was clear that despite his zen outer demeanor, Sagan is taking 2018 very seriously. If the Slovakian can continue to build his form into the Monuments, we could finally see the dominant Spring Classics performance we’ve been waiting on for years.

The 28-year old Dutch rider came out of nowhere to win the 2013 TDU and win two stages of Paris Nice in 2014. He then had three years on Garmin/Cannondale/EF that was marked by a lack of results and consistency. A transfer to the spunky Dimension Data has seemingly rejuniviated his career, displayed by his third place overall last week.

The young neo-pro from South Africa rode out of obscurity to hold the climber’s jersey from start to finish at last week’s TDU. The Dimension Data rider wasted no time making an impact in his first UCI WorldTour level race. He is a rider that could be leaving his mark on the world’s toughest race for years to come.

The jack-of-all-trades journeyman South African scored the biggest win of his career on Sunday with his highly impressive overall Tour Down Under victory. Despite his team coming into the race claiming they had no interesting in the overall victory, Impey stayed attentive when he needed to be and picked up just enough time bonuses to surprise the favorites. The veteran rider became the first African to wear the Tour de France’s leader jersey in 2013, and continues his advancement of African cycling with his most recent victory.

Looking back through the TDU stage by stage to examine where Impey won the race, it is apparent that while he lacked a stage won, his consistency along the entire air-tight race was key. His ability to score two second-places in sprint finishes, while being able to put in the ride of his life up Willunga Hill to take an additional second place after being dropped earlier on the climb, showcases Impey’s impressive wide-range of skills. By taking a career-defining win and showing the world his immense versatility, Impey, without a doubt, leaves the TDU with the biggest winner of the week.

One thought on “Monday Power Rankings: Riders Trending Up and Down After The Tour Down Under”