Team Sky has a well-earned reputation for taking the excitement out of professional cycling with their tactic of lining up the world’s best and most expensive riders at the base of the final climb of every race and riding the competition off their wheels until their designated leader rides away for the stage and overall victory. This type of mechanical riding has caused major races like the Tour de France to retool their route to foil it and even has the director of the Tour calling for power meters to be banned to keep the team from riding such a brutal and metronomic pace.

The secret? Simply have the strongest rider in the race on your team.

At the bottom of the final climb of Thursday’s second stage of the Volta ao Algarve, viewers were treated to a common sight. Team Sky moved to the front of the peloton and proceeded to gradually raise the pace to an internal level that burned off all but a select few competitors. 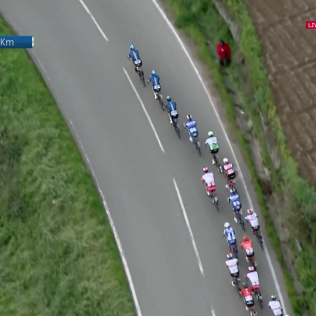 As the race neared the final kilometer and exhausted Sky domestiques swung off one-by-one after completing their pacemaking, leader-for-the-week Wout Poels was dropped off with slightly over a kilometer meter to strike the killer blow on the remaining competition.

Poels pulled the triggered with a few hundred meters remaining, easily pulling in Amaro Antunes, who had made a late solo flyer and appeared set to take the stage win and all-but-seal overall victory. However, this well-worn script was flipped on its head, when previously unknown Tadej Pogačar (how the heck a tiny European country is churning out so many world-class riders will be explored in a future post) not only followed Poels, but jumped past him to take the stage win and the overall race lead. 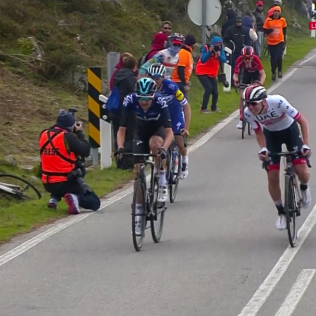 To prove this performance wasn’t a fluke, Pogačar beat Poels by 36-seconds in the stage 3 time trial the following day. Pogačar now leads the race by over 30-seconds with only race decisive stage remaining.

The wealthiest team being outgunned by an unknown, 20-year rider with no team support really exposes the theory that Sky has hacked professional cycling with their uber-powerful mountain lead-out train and fancy power meters. The train is merely window dressing and somewhat obscures the fact that Sky nearly always possesses the strongest rider in a given race. When Chris Froome and/or Geraint Thomas show up at the Tour de France as the strongest climbers in the race, their team riding a fast pace on the final climb helps them only because they are simply fitter than every other rider attempting to match them.

On Thursday, Pogačar even benefitted from Poels’ teammates keeping the pace high and deterring attacks from rivals. Poels’ team did everything right, and even Poels himself laid in wait and attacked the way Froome or Thomas would have, but he simply didn’t have the fitness and power to ride a better rider off his wheel.

On its face, this result is somewhat inconsequential. A young rider beat a leader-less Sky at a small, early-season race in Southern Portugal. However, this shows that dominating mountain stages isn’t the video-game that the cycling media portrays it to be. When riders line up and ride up a mountain as fast as they can, the strongest rider usually wins. This is something to keep in mind as we head into the 2019 season and Sky heads to the Tour with two long-in-the-tooth leaders. We may finally begin to see younger, stronger riders land serious body blows on the previously unstoppable Sky dominance.