Simon Yates heads into the second week of the Giro d’Italia with a 38-second lead over 2017 champion Tom Dumoulin. While Yates currently has the pleasure of wearing the Maglia Rosa of the race leader, if he wants to be crowned the overall winner in Rome on stage 21, he needs to race every mountain stage as if he had time to make up. The looming 34.2km individual time trial on stage 16 rips down the Adige valley in the Dolomites and will serve as an opportunity for Dumoulin to pull back significant time. We all know that Dumoulin will get time back on Yates, but the million dollar question is exactly how much time Yates will concede. If he can survive the barrage from the big time trial specialist, he will likely emerge victorious at the end of the three-weeks.

Triangulating an accurate estimate is difficult, because like two ships passing in the night, Yates and Dumoulin haven’t met head-to-head in many individual time trials. A cursory glance will show us that since 2015, they have faced off on six occasions, with Dumoulin taking an average of 2.68 seconds per kilometer out of Yates. However, this sample is somewhat tainted by the time trial from at 2018 Abu Dhabi Tour, where Dumoulin suffered a mechanical and was forced to change bikes mid-race. If we take this race out of our sample, Dumoulin has taken 2.89 seconds per kilometer out of Yates. 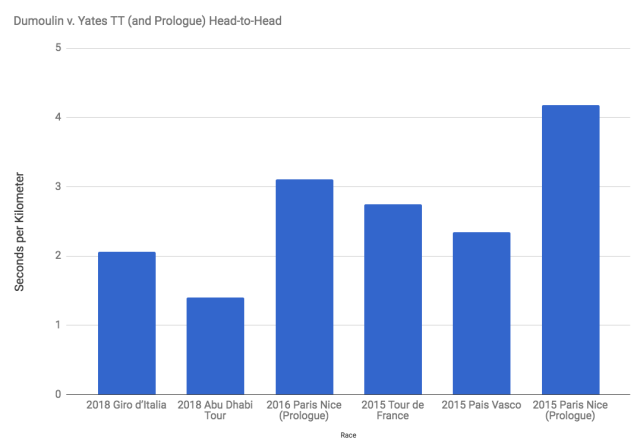 When we extrapolate this average per-kilometer difference out to 34.2km, the distance of the final time trial at the 2018 Giro, Yates stands to lose 92-seconds in the race against the clock. Keep in mind that none of these previous meetings feature a course longer than 18km, and the longer, straighter and flatter the course, the more time per kilometer the stronger time trialist will be able to take.

Yates has seen mild improvement in his time trialing ability in recent seasons and managed to limit his loses in the opening time trial of the 2018 Giro d’Italia to 2.06 seconds. This course featured technical corners and downhill sections, so it isn’t a one-to-one comparison to the wide-open course the race will see on stage 16. But, if we use the most recent data we have and stick to the 2.06-second difference from the opening stage, Yates could feasibly limit his losses to 70-seconds.

Yates has said that Dumoulin could easily take two to three minutes out of him, and while that statement feels when you first hear it, the limited numbers we access have to don’t back it up. If Yates can limit his losses to between one and two minutes, he certainly has a legitimate chance of winning the overall if he can continue to take precious seconds on the remaining uphill finishes. Even if he losses 90 seconds to Dumoulin in the TT, he is likely to take time from Dumoulin on the brutally steep Monte Zoncolan, and stages 15, 19, 20 all feature multiple climbs leading into an uphill finish, which present great opportunities for Yates to slip away and put time into the big Dutchman.

Of course, Dumoulin was in a similar position during last year’s Giro, and most expected the time trial specialist to lose serious time to the climbers once the race hit the mountains. Instead, he stuck with the best climbers and even put time into them on the Oropa summit finish on his way to a definitive victory. Lurking outsiders like Thibaut Pinot and Domenico Pozzovivo can’t be ruled out, but the final week appears to be on track for a Dumoulin/Yates head-on-head collision. Part 2 of this piece will attempt to estimate how much time Yates stands to take from Dumoulin the Giro’s mountainous final week and if the Dutchman has a chance of holding on to the jersey if he ends up taking it back on the stage 16 time trial.

Chris Froome lost 37-seconds to Tom Dumoulin in the opening time trial of the 2018 Giro d’Italia on Friday. Conventional wisdom tells us this is no big deal.

“There is plenty of time for Froome to make up this margin. The race is 21 stages long, and we still have the mountains! It’s way too early to count anybody out! Anything can happen!”

However, after taking a deeper look at trends from the recent past, conventional wisdom proves to be incredibly wrong, and this time loss seems much more significant than appears at first glance.

Citing the fact that we are three stages into a 21-stage race is a bit misleading. Time gained or lost on the first stage is equally significant to time gained or lost in the first week. I’m of the belief that both fans and teams tend to overvalue potential time gaps in the third week of a grand tour, while greatly undervaluing the chances to gain time in the first week. A second on day one is equal to a second on day 21.

Since 2015, five out of nine grand tours have been decided by less than a minute. In last year’s Giro d’Italia, a gap of 40 seconds separated the entire podium. While casual observers assume that even though margins are tight in the opening stages and we’ll see major gaps open up in the mountains, these stages rarely serve up the time gaps they would expect.

Below is a graph showing the winning margin in every grand tour since 2015. A quick glance will tell you that 40-seconds is a significant margin of separation.

If Froome’s loses this year’s Giro d’Italia by his current deficit, it wouldn’t be the first time a recent grand tour was decided by an opening time trial. The 2016 Tour de France opened and closed with the opening time trial in Dusseldorf. Eventual second-place finisher Rigoberto Uran ceded 51 seconds to Froome over the 14-kilometer course. After three weeks and 21 stages of racing, the Colombian rolled into Paris 51 seconds behind Froome.

Furthering the seriousness of this time gap is that the Giro organizers dialed back the number of traditional climbing stages in the Dolomites and placed a greater significance on the time trials in an attempt to court Froome and Dumoulin. The irony of this is that a course tailor-made for Froome could end up being his undoing.  We’ve seen he hasn’t been on the same level as Dumoulin in the race against the clock since the Dutchman absolutely crushed him at the 2016 World Time Trial championships.

It may seem counter-intuitive, but in a three-week grand tour, every second counts. The spontaneity and ample time gaps that so many fans expect simply aren’t that common, and the opening time trial is proving to be just as, if not more, important than a 7-hour, 6 categorized climb, queen mountain stage. Whatever happens, don’t be surprised if the top two places in the Giro ride into Rome in three weeks with less than a minute between them.

The Giro d’Italia starts tomorrow and a pu pu platter of contenders will line in an attempt to take home the Maglia Rosa at the end of the 3-week race. Despite the plethora of talented up-and-comers, the 3-week long race will likely come down to a duel between Tom Dumoulin and Chris Froome.

Dumoulin will be the only former winner to start, while Froome and Fabio Aru are the only other riders in the race with grand tour wins to their names. There is a sea of young pretenders like Miguel Ángel López, Esteban Chaves, Simon Yates, and Thibaut Pinot, that will attempt to finally close the gap from also-rans to champions, but to win a Grand Tour, it helps to have already won one, along with an ability to post a good time trial.

The race only features 43km of time trials, but recent grand tours have seen an inverse relationship between the amount of TT kilometers and how decisive those kilometers are to the final result. Dumoulin and Froome are the only two riders in the field that can climb with the best while putting serious time into the competition the time trial.

Aru has a grand tour win, but he has struggled to find the consistency that propelled him to that 2015 Vuelta a Espana win. He has shown flashes of brilliance, best exemplified by his performance on stage 5 of the 2017 Tour de France. Aru rode away from feared SkyTrain like they were standing still and went on to win the stage and take the overall lead.

These sublime performances are tempered by the fact that you never quite know what you are going to get from the Sardinian. He could ride away for an impressive mountain stage victory constantly or crack to lose significant time. This lack of consistency and his weakness in the time trial make it difficult to imagine Aru wearing the Maglia Rosa in Rome.

Thibaut Pinot looked fantastic at the recent Tour of the Alps, but the Frenchman is infamous for his erratic performances. He is in the rare club of riders who can climb with the best and put in a solid time trial and I would love to see Pinot break through and take a Giro win, but I certainly wouldn’t put any money on it happening.

Miguel Ángel López is being touted as a contender. He is a fantastic rider who appears to be riding an upswing of form, but as is the rule in modern grand tours, the fewer number of overall TT kilometers means the importance of those kilometers is magnified. The 2018 Giro will be decided by the gaps seen in the time trials on stage 1 and 16, and Lopez doesn’t have the ability to hang with the contenders in the race against the clock.

With gaps in climbing stages getting slimmer, the time trials are likely to decide the fight for the GC. This means Froome and Dumoulin have to be considered the top two favorites since they are simply at another level against the clock. Even though Froome’s powers appear to be waning and he hasn’t displayed great form so far in 2018, his first win in 2017 didn’t come until the final day of the Tour de France, when he took the overall victory. However, he is a year older, his form hasn’t had the same sparkle as in pre-Tour 2017, and he has been forced to put an immense amount of energy into the defense of his Adverse Analytical Finding. His lack of form and ongoing legal battle makes it difficult to imagine him winning a third consecutive grand tour.

Even taking the above into account, Froome still has to be considered a safer bet than anyone not named Tom Dumoulin.

Dumoulin rode to an emphatic victory in the 2017 Giro despite spotting his competition over two minutes due to an ill-timed bathroom break during the most decisive stage. His win appeared to be the coronation of a future star, but his buildup to the 2018 Giro has been a disaster, which saw the Dutchman struggle to finish the majority of his early-season races for a plethora of reasons. However, his impressive 15th place at the recent Liège – Bastogne – Liège showed his form could be coming around just in time for the Grande Partenza in Jeruselum.

With Dumoulin throwing verbal jabs at Froome in the days leading up to the start, the 2018 Giro is shaping up to be a fantastic showdown between riders at opposing ends of their careers.