The Ronde van Vlaanderen, or the Tour of Flanders, arguably the most prestigious and dynamic one-day race on the calendar was won by Alberto Bettiol, a complete outsider and unknown prior to Sunday. The 25-year-old Italian shocked the cycling world when he held off a chasing group comprising the best one-day riders in the world to take the first win of his professional career. While the favorites and pundits were shocked such an outsider rode way away with such a major win, those watching the race unfold in the finale 150km shouldn’t have been. Flanders is all about hiding from the wind and saving your bullets for the final 20km. Bettiol did exactly that and was rewarded with the biggest victory of his professional career.

The two most-hyped young riders coming into the race were Wout Van Aert and Mathieu Van der Poel, former and current Cyclocross World Champions who have experienced immediate success on the road. While they are both incredibly talented and undeniably some of the strongest rides in the race, their inexperience in long Classics was apparent on Sunday.

Flanders rewards those who wait,  but both Van der Poel and Van Aert were on the front eating wind while launching unsuccessful attacks much too far from the finish line.

As the screenshot below shows, Van der Poel and Van Aert were on the front attacking to split the field with 79kms left to race while their rivals sit in the wheels getting a free ride.

Even a cursory re-watch of the race shows both Van der Poel and Van Aert using significantly more energy than eventual winner Bettiol at almost every point. In the screenshot below, Van der Poel is attempting to bridge up to a group of non-threating riders at a point where he should be recovering for the Oude Kawaremont.

This trend of the two young guns using unnecessary energy continued throughout the day, with both Van der Poel and Van Aert attempting to ride away from the group with 28km to go while Bettiol deftly stayed in the wheels. 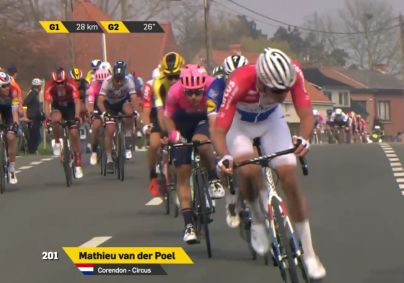 When Tim Wellens attacked a kilometer later, Bettiol was able to easily cover the move, while Van der Poel struggled to close the gap. Notice how a free-wheeling Bettiol is sitting right behind Van Aert while Van der Poel is spending precious energy behind. 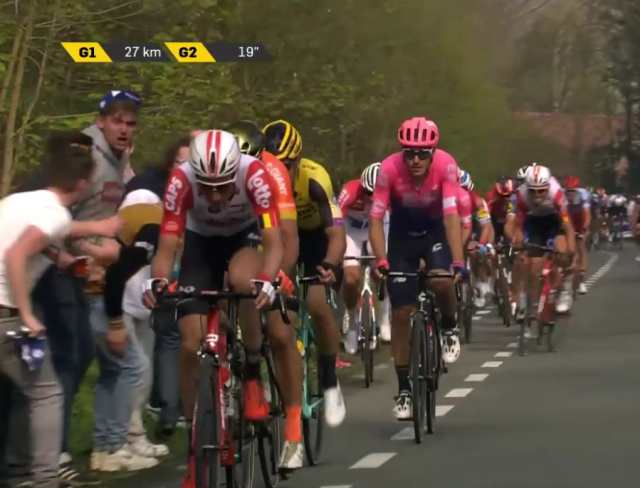 When Bob Jungels countered Wellens move, Bettiol is able to easily latch on, while Van der Poel and Van Aert are forced to chase (note Van Aert on the front pulling what remained of the peloton in the background).

When Sepp Vanmarcke, who was strategically placed up the road earlier in the day, drops back, Bettiol has a teammate and a gap going into key sections. 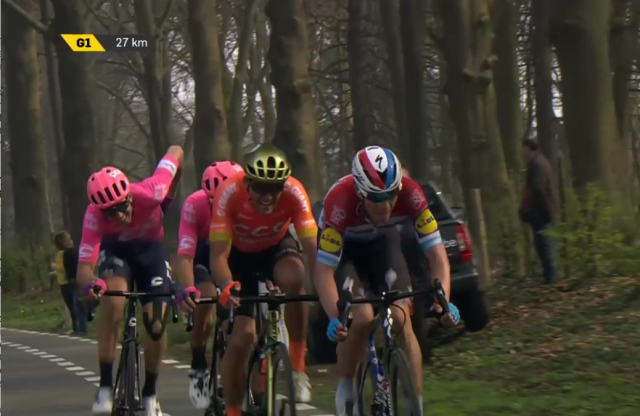 Up until this point, it is nearly impossible to find an image of Bettiol on the front. The Italian leveraged his team’s perfect strategy to get a free ride to the base of the Oude Kwaremont, where he launched his vicious race-winning move.

In fact, the first time he touches the front is when he goes around Van Avearmat during his race-winning attack 9-kilometers later.

Bettiol was so fresh compared to the others that no one could even come close to matching his pace. You have to wonder if Van Aert and Van der Poel had ridden a smarter race if one or both of them would have been able to jump on the wheel. Instead, their precious energy had been burned in the many kilometers prior and all they could do is watch as the win goes up the road (also, Van der Poel’s crash with 60km to go and subsequent incredibly impressive chase likely sapped what was left of his race-winning mojo. On the other hand, the massive effort to chase back on meant he should have been even more conservative heading into the Oude Kwaremont).

Bettiol would pull out 10-seconds by the top of the Oude Kwaremont, and take 10 more on the 3 kilometers to the base of the Paterberg. The bunch would take 3 seconds back on the steep climb but would fail to take any more time and ultimately finish 17-seconds in arrears.

The young Italian wasn’t a household name before Sunday, but he displayed a champion’s patience all day and capitalized on other’s over-eagerness and hesitation to take a beautiful solo win.

Other Race Notes:
Previously unknown 24-year old Dane Kasper Asgreen rode to an impressive second place after clipping off the front with a little over 50-kilometers to go. This invasion of the young guns could signal a major demographic shift amongst top favorites for these top-tier classics.

Alexander Kristoff looked incredibly strong up the steep bergs and invincible in the bunch sprint for third place. Watch for the big Norweigan to take the win at next weekend’s Paris-Roubaix.

Many are expressing disappointment with Deceuninck-Quick Step tactics and results, but they were successful and springing an unknown rider to second place after finding themselves in an incredibly difficult position with Bettiol up the road and Kristoff lurking in the chase group. Their star riders (Stybar, Gilbert, Jungels, Lampert) simply weren’t strong enough, but that is understandable after Stybar and Jungel’s incredible form in February/March, Gilbert being over-the-hill and Lampert looking off his best all season.